Designing a Bath for My Younger Brother

What happens when a younger brother asks his older sister for interior design help? My brother and I get along well now that we are adults, but we did have some heated fights when we were kids! I was flattered when my brother and his wife hired me to redesign their bath. They own a charming 1920’s bungalow in San Jose, but their bath had been remodeled in the 80’s by the previous owners, featuring a floral wallpaper border, and green and mauve color scheme. Remember that look? The idea was to create a comfortable oasis for them, with modern conveniences, and to use materials more in keeping with the original look of the home.

Ask my brother and he’ll confirm that I was most certainly a bossy older sister when we were growing up—I would forcefully dictate to him what we would watch on TV, and rudely order him leave the room when I had friends over. However, he also pushed my buttons, saying exactly what he knew would send me over the edge. We fought a lot as kids, but we also had lots of fun times together, like the year we moved to Sunnyvale and spent the entire summer outside playing “Jaws” in the pool and board games on the diving board.

So when he and my sister-in-law asked me to help them with this project, I had to dance a fine line of being a sister and being their designer. As a designer, I have to take the lead, present ideas, and be able to explain why I planned things a certain way. With regular clients, this approach is often just what they need. But would it seem bossy to my brother? How much do I direct the project and how much do I step back? Fortunately, the experience turned out to be a great one, despite a few construction glitches along the way. He says he’s glad that I “big-sistered” this project because he admits that he and his wife sometimes have trouble making decisions. So my big sister role served us both well this time. 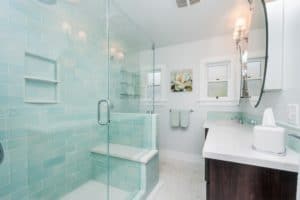 The result is a beautiful, modern bathroom with lovely vintage touches. My sister-in-law and I made an afternoon of tile shopping and ultimately selected the watery, soothing aqua blue hand-made subway tiles that set the tone for the whole bath. The gray, white and aqua color scheme creates a crisp and clean look, and the polished chrome accents add some sparkle.

We replaced the old awkward corner tub with a roomy walk-in shower, and I designed a vanity cabinet to make the most of the narrow room and provide as much storage as possible. Two large mirrored medicine cabinets add extra storage and also allow two people to stand comfortably at the vanity.  My brother says it’s easy to keep things tidy, as now there is room for all of their toiletries.

A big change in the room was to relocate the toilet to the back corner behind a pony wall; in the old bath, the toilet was the first thing you saw from the door, which bothered my sister-in-law.

I selected a marble-look Cambria Quartz called Torquay for the countertop and bench seat, and the floor is a mosaic of white and gray marble. The wall color is a soft white with a gray undertone, which keeps the room light and airy.

I’m happy to report that my brother and sister-in-law are really enjoying this new bath. He told me that, on their last vacation, they realized that for the first time ever, their bath was nicer than the bath in the hotel! A great compliment indeed, especially from my little brother. 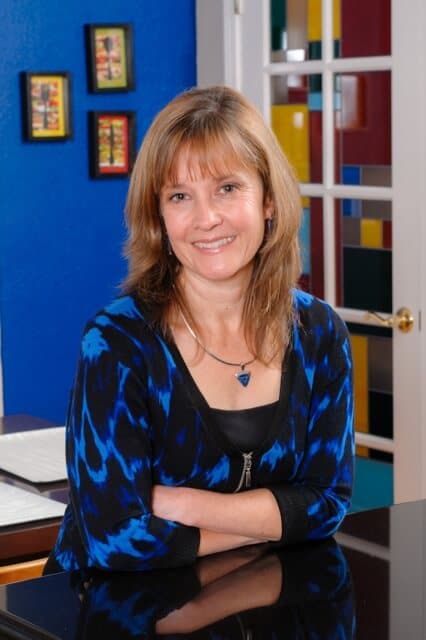